Leave a comment
By JA Activism, Climatic Change and Resilience, Energy and Society

The world should remember: Lima talks did nothing to stop the climate crisis

The UN climate change talks in Lima are over. Instead of finishing on Friday afternoon, they went on till 4am on Sunday. It came close to a few break-downs because developing countries were really pushing back at the way at which developed countries were trying to control the situation. But finally there was a so-called ‘consensus’. But make no mistake, what was agreed in Lima did not and will not do anything to stop climate change.

The final approved text was driven by the interests of rich developed countries and corporations. This contrasted sharply with the real leadership and inspiration demonstrated in Lima by social movements, organisations and the communities on the frontline, who are already suffering the impacts of climate change.

Rich developed countries came to Lima determined to ensure that the outcome reflected their short term economic interests, as if the climate crisis really does not matter. The outcome lacks courage, justice and solidarity with the billions of people affected by climate change.

Activists chanting “no justice, no deal” 2 hours before the final terrible text was approved. Photo credit: Yumi Sato
At the same time as the negotiations, again this year the Philippines endured more extreme weather and communities around the world are paying for the carbon excess of others with their lives and livelihoods. The Lima outcome failed people and the planet at a time when real solutions are needed more urgently than ever before.

The outcome says nothing about the drastic emissions reductions needed before 2020, without which we are at risk of an even greater temperature rise and climate breakdown. The outcome undermines historical responsibility. The urgent obligation of developed countries to provide climate finance is glaringly missing. This text creates an architecture that will set us up for a doomed deal in Paris. This is completely unacceptable. Governments of developed countries need to urgently find the necessary courage and political will to deal with the scale of this planetary emergency.

But away from the negotiating halls, people continue to mobilize and build an enduring movement to implement the real solutions to the climate crisis. Justiça Ambiental was there observing and building alliances with movements and organisations. The Peoples’ Summit on Climate Change (Cumbre de los Pueblos/ Cupula dos Povos) – which ran parallel to the UN talks – gathered together social movements and organisations from Peru, Latin America and all over the world. They exchanged experiences and continued to build momentum for the transformation needed to address the roots of the climate crisis and create a better, cleaner and more just world.

Almost 20,000 people marched in a huge protest (the March in Defense of Mother Earth) on December 10 — international human rights day. 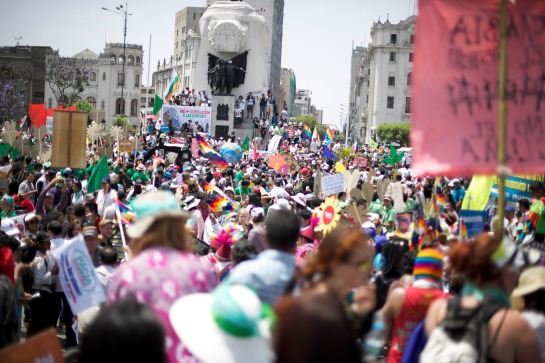 From farmers to miners to environmentalists to students… Marchers called for justice and real solutions to the climate crisis, including steep and immediate reductions in carbon emissions, stopping fossil fuels and deforestation, building renewable community-owned energy solutions, and protecting our agroecological food sovereignty systems.