1 Comment
By JA Activism, Energy and Society, Pollution and Environment

Ills and illogics of Coal

The coal monster is finally starting to show signs of illness and decline. The campaign against coal in the US has had some major victories and has sent coal into the sidelines in future energy planning, with even President Obama publicly mentioning the phasing out of coal in his speech on Tuesday at Georgetown University. With numerous coal power stations reaching the end of their lifespan, US coal consumption is on the decease and has placed the US in a situation where it can become a major global coal exporter instead of a user.

In China the first signs of change are already visible. In 2010 in China, coal was overtaken by renewables in newly-installed energy capacity, and China’s strategies and long-term planning are starting to reflect this move away from coal to a more diversified energy capacity. When even China starts to prioritize moving away from coal, then we know the tides are changing. These changes even though early and relatively small are starting to bear fruit. For example Mongolia’s future development path was set to be heavily based on exploration of their vast coal reserves to supply China’s coal needs, and Mongolia borrowed heavily on the usual assumption of revenues associated with coal. However, coals prices have been crashing and China’s increase in coal consumption has been slower than projected, while increase in using cleaner alternatives has been higher than projected. This has caused havoc to Mongolia’s debt and, in turn, its development future. 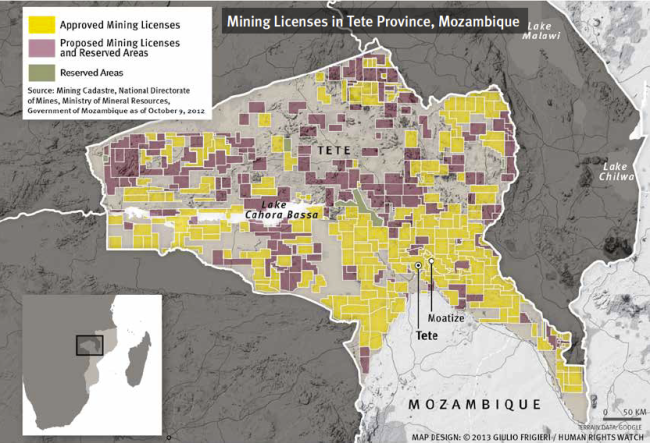 In our own country, Mozambique, these risks are being felt. Both Vale and Rio Tinto (who according to our sources has already put their business in the country for sale) are feeling the impact of the infrastructural bottlenecks, with extensive delays and cost overruns affecting their profit margins. Coupled with decreasing coal prices, uncertain economic projects and over optimistic assessments of the quality and size of the Mozambican reserves have resulted in billions of dollars of losses. These losses are despite a very favourable, secret contract that the companies negotiated with the Mozambican government, which is unfair to Mozambique, in that it gives little benefits for Mozambique, but high negative impacts.

At a broader technical level, one starts to realise the difficulties that coal is facing. The construction cost for coal power stations have sky-rocketed and the extensive infrastructure and logical requirements (railways, ports, terminals, etc.) are facing bottlenecks around the world that further increases the overall costs. At an economical level, the risks are constantly increasing. A recent commodities report by Deutsch Bank showed dismal projections and further decreases in the possible returns from coal.

On the other hand, the cost of clean alternatives are steadily decreasing and options like wind are already cheaper at a dollar per Kilowatt produced rate, and within the next few years even solar will become cheaper. The investment world is also starting to understand and benefit from the positive components that alternative energy present. For example both wind and solar have very short periods between investment to profitability and are highly modular. Wind turbines can be installed and placed on grid in a very short time period and gradually increased in successive phases in direct correlation with demand. In contrast coal power stations are very large point investments with very long construction periods, often extended by delays. They depend more on long-term demand projects that are regularly over-optimistic or completely incorrect. Due to the long life span the production capacity is usually much higher than initial demand in order to cope with future projected demand increases, which makes the investment larger than required. Whereas alternatives start returning profits in a modular manner, as each phase is complete, traditional coal-based production has no returns until the full project has been completed and then it causes a huge peak in energy availability which can cause a decrease in energy prices due to over-supply. The need for forward planning and the regular energy peaks inherent in coal-based energy production has also been given as one of the reasons for the low priority of the energy sector for not focussing on energy efficiency.

Coal also developed as a sector during a time when economics were more open to subsidies and had a narrow notion of costs and responsibilities, if it were starting today it would be considered crazy. Unfortunatly, many of these issues are still part of common practices in the coal sector. Subsidies include direct spending, tax breaks or exemptions, low-interest loans, loan guarantees, loan forgiveness, grants, subsidised railways and ports, and much more. In terms of global subsidies in 2010 fossil fuels received almost 7 times more subsidies than renewables, and this value is based a narrow definition of subsidies. Then their is the external cost from coal. For example a Harvard medical study calculated that the additional heath and environmental cost from burning coal has cost the US $500 billion a year. Governments also lose extensive revenues from discounted royalty fees from lands, water and many others. It is common practice for mines and coal power station not to pay at all, or pay insignificant amounts for environmental services such as water (which they consume and pollute in copious amounts), nor do they restore the damage they cause. In fact just the indirect subsidies of fossil fuel, such as favorable access  to land, water and other breaks is valued to be equivilate to the total amout of subsidies received by the renewables sector. The Greenpeace South Africa report “The True Cost of Coal” highlights this absurdity of coal. Actually more than 200 different form of subsidies have been identified.

On top of this, coal is one of the main drivers of climate change, making it one of the main targets for the climate change debates. It is not a matter of “if”, but a matter of “when” serious carbon restrictions and limits start being imposed, at that time coal will be one of the most affected. However, even now with no true restrictions from the international climate change negotiations, the environmental and social problems associated with coal are so devastating and well-known that it is leading to an ever-increasing opposition to coal worldwide. It is getting ever more difficult to obtain public consent, which is becoming a growing requirement in democratic countries around the world.

In addition to competing with ever-improving clean alternatives, coal is also competing with other extractives. Most mining companies cover a host of extractive activities, but have limited resources to invest in new projects; therefore decisions have to be made between the different mining proposals. Given the increasing risks of coal it has fallen down the list of profitable investments.

Unfortunately, monsters like coal do not go down quietly. Whenever the illness of coal is exposed, a number of sector “specialists” proclaim its heath through hyper-positive projections and possible profits in the attempt to continue the investments into coal. As the industry starts realising the limited future in developed countries it turns to Africa and can always count on the short sightedness and corruption of our unaccountable leaders to allow for bad decisions. Let’s stop being the dumping ground of dying technologies.

At present coal is living through the latency associated with change and is still viable for already developed coal sectors in the near future, but dangerous for countries that are just starting to develop their coal development. Africa, and Mozambique in specific, doesn’t need to follow this destructive path to development, and the associated devastating impacts, that was used by the current powers. We can skip the potholes of development like we did with communication. Most of Africa did not have a wired line phone system, so we skipped this resource and time-extensive method, and went straight to the cleaner, more efficient wireless cellular communications route. Let’s do the same for our energy and revenue development path.

One thought on “Ills and illogics of Coal”