As 2013 ends, we are forced to consider that the year saw the situation in Mozambique deteriorating quite a bit.  Already in 2012, there was a marked decrease in the civil society space and a lack of openness for serious and transparent dialogue with the government. We entered 2013 with hope, convinced that things certainly could not get worse. Today, we don’t know how to evaluate the year that ended yesterday, nor what to expect from what’s coming up. Across the country, human rights crimes and violations only increased, along with land grabbing, conflicts between communities and investors, and the destruction of our natural resources by corporations in the name of ‘development’. The denounces by civil society increased, but somehow we kept being ignored by our legal system, which should be sorting out the many injustices resulting from the investment boom, but instead is busy with other issues.

We needed to have a huge imagination to predict that 2013 could be worse than 2012. Who could have imagined that the military and political tension would bring us back to arms. This came along with the wave of kidnappings and total sense of public insecurity for the people

But despite the hostile climate, civil society in Mozambique continued its work. With all the threats, constraints and usual total disregard for our work, JA and other allied NGOs remained united in the fight against the large land-grabbing of ProSavana and support to subsistence farmers, support to communities displaced by coal mining in Tete province, in fighting the implementation of REDD projects in Africa, combating land-grabbing by Wambao agriculture and all over the country, in short, the usual fights.

Although for the worst reasons, but 2013 saw an emotional, exciting and prominent event in Mozambique. On 31 October, more than 30,000 Mozambicans citizens took to the streets to participate in a vibrant peace march. 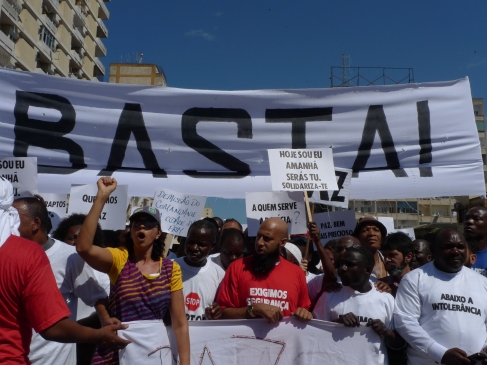 We protested peacefully with chants of ‘No to war!’ ‘No to corruption!’ ‘No to kidnaping abductions and insecurity!’ And, the big one, ‘Down with the government!’ was shouted in unison through the streets of Mozambique’s capital, Maputo, but also in other cities such as Beira, Pemba, Quelimane, Nampula and certainly to a lesser extent in many other parts of the country. It was a perfect demonstration of how the Mozambican people are tired of false promises and hollow speeches. The people took to the streets to say ‘BASTA!’ (Enough)

But the year was not over yet…

In November we had local-level elections and all the problems that arise repeatedly in our country (with an absurd normalcy) of what should be a simple democratic exercise including deaths, fraud, assault and more. It was sad and shameful indeed. Attacks on civil society continued.

To close the year, the cherry on the cake was that in early December, Mozambican academic Carlos Nuno Castel-Branco was summoned by the Attorney General & criminal proceedings were brought against him and the media outlets, Canal de Moçambique and Mediafax. All this was because he wrote a harsh open letter to the President, Armando Guebuza criticizing his governance and the two media outlets published it.

Mediafax has explained that the two newspapers are accused of abuse of press freedom for publishing Castel-Branco’s letter. Once again the government has used imagination and creativity to shrink the space. Abuse of freedom! Are journalists no longer free to publish opinions of individuals? Worse, do citizens still have the right to give their opinions? Or are we about to lose one of our most fundamental rights?

Critical thinking and opinion are fundamental to the development of a society. If wrong, absurd and/ or radical, the ideas expressed should be challenged in the same way: BY WORDS.

Across the world, every day, governments and rulers are subject to criticism and always will be! Especially when they forget who they represent… Who does like being criticized, should not enter into politics.

“If the process moves forward and ends in conviction, our freedoms will be threatened,” wrote Dr Alice Mabote of Mozambican Human Rights League in an open solidarity letter to Castel-Branco, challenging the Prosecutor to also add to the prosecution list her and all other Mozambicans who criticize the “mis-governance” of Armando Guebuza.

These proceedings are absurd. JA joins civil society in denouncing them and we extend our full solidarity to Professor Carlos Nuno Castel-Branco, Canal de Moçambique and Mediafax and calls for civil society and the Mozambican media to not be intimidated.

We will continue the struggle for environmental justice, social justice, for a better future for future generations and for a better world where differences are resolved by exchanging ideas and not bullets. Our words are our weapons, and because we are right, sooner or later we will win with them!

“In the pursuit of truth, it is forbidden to put words in handcuffs,” said Carlos Cardoso, Mozambican journalist assassinated in 2000.

The JA team wishes everyone a justice-filled 2014.