Leave a comment
By JA Activism, Climatic Change and Resilience, Energy and Society, Water and Development 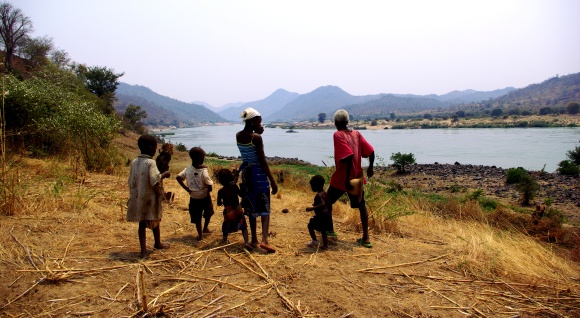 “Hydroelectric dams in Africa may be among the most enduring of colonial legacies. They persist in ways that laws or traditions or patterns of life do not. They stand fixed in the landscape, changing the world around them while they themselves prove stubbornly resistant to significant change. Cahora Bassa, completed on the Mozambican stretch of the Zambezi River in 1974, the year before the end of Portuguese rule, was catastrophic for the approximately half-million people who depended on the river and its delta for their livelihood and for the tens of thousands who were forcibly relocated when the dam’s lake was created. Even today, the flow management scheme required to maximize export of electricity to South Africa continues to wipe out dry-season crops and drastically reduce fishing, making life along the Zambezi barely supportable.

Despite the traumatic history of Cahora Bassa, the Frelimo government is committed to a colonial-era plan to build a second dam approximately sixty kilometers downriver from the first. In many respects, Mphanda Nkuwa, as the dam project is called, looks like a replay of the colonial past. Mozambique justifies the dam in language largely unchanged from the colonial era. The overarching economic imperative driving the dam is the same—cheap energy for South Africa.”[1]

In light of our Head of State’s, among others’, recent pronouncements regarding our government’s intention to go forward with the wretched Mphanda Nkuwa dam project, Justiça Ambiental hereby reiterates its position of total repudiation regarding this venture and, as is its duty, once again alerts civil society to the dangers that this project entails for the country, the region and the planet.

Environmentally speaking, it is absolutely obvious and unquestionable that this dam (or any other dam) on the Zambezi (or any other river) is a bad idea, and it’s not just us who are saying it, it’s an entire scientific community in unison. Moreover, in the specific case of the Mphanda Nkuwa hydroelectric plant, the environmental unfeasibility of which we speak is not solely justified within the fundamental scope of ecological preservation, because it also translates into an inevitable and comprehensive economic unfeasibility. This is because, according to reports from the United Nations Framework Convention on Climate Change and International Rivers[2]“, for example, even without the dam in Mphanda Nkuwa, the Zambezi is one of the rivers in Africa that will suffer the most impacts from climate change due to the intense droughts and floods that are projected to the continent in the medium and long term, and such climatic events will certainly jeopardize the energy production of its many dams – particularly the Mozambican ones that are at the end of the line.

Equally troubling, if not more, is that regarding this project, several experts have already warned that building a new dam in a region where seismic risk is already naturally considerable, will substantially increase this risk. Needless to say, if a violent earthquake causes a dam to collapse, the consequences would be catastrophic.

Having said this, we plea to our government’s common sense, and appeal that, once and for all, they forget this madness. However, if they decide to squander the public purse in stubbornness – since the parties involved at least admit that the EIA of the project is out-dated (not to say that it was poorly drawn and / or that it is deeply biased) – we appeal that this time around, for the sake of Mozambique and Mozambicans, they conduct a careful, impartial, serious and inclusive assessment.

Still, before taking that step, in order to dispel understandable speculation about the economic motivations that are bringing this project back into the limelight – made evident in the news regarding investor and/ or pseudo-investors disputes brought up by the media last week – we would like to appeal to the Government that, before actually consulting Mozambicans, bluntly and with full transparency, they clearly and completely clarify the outlines, objectives and the rationale behind this project, including:

But because we are who we are, we can not fail to stress that at this point in time, we believe it is a gross mistake to invest in dams (for more of this dimension) as an energetic solution, when we know very well of its harmful effects. – This positioning is backed by the known and public withdrawal of countless countries from this type of solutions. (In the US alone, for example, in the last 100 years an estimated 1150 dams have been demolished!)
Why are we rowing against the tide, gentlemen?