2 Comments
Activism, Climatic Change and Resilience, From the Field, Responsibility and Justice, Water and Development

On Thursday, 14 March, Justiça Ambiental (JA!) marked the occasion of the ‘International Day of Rivers’ by holding simultaneous events in Tete and in the capital Maputo.

In Tete, over 50 community people came together on the banks of the Zambezi River. These included communities that will be displaced

Removing a fallen tree on the way to Mphanda

from their lands and homes if the Mphanda Nkuwa Dam is built across the Zambezi River. We were also joined by communities affected by Vale, Rio Tinto and Jindal, all carving out the earth to extract coal from their villages.

The all-day meeting was held at the Tete Provincial Centre of Agricultural Formation. JA supported the community members to come in the night before, since their homes are far and the transportation systems in Mozambique are very poor. The communities affected by Vale, for instance, used to live in Moatize, 19kms from Tete. Now they have been moved to 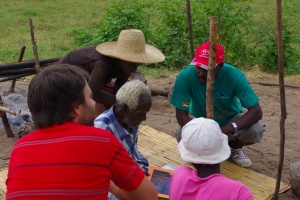 Sr. Morais lived his entire life near the river, if the dam is built he will have to move far from the river. What about his rights!

Cateme, 56kms away from Tete, and transport could easily cost 150 Meticais (US$ 5) each way! The Mphanda Nkuwa communities live over 70kms from Tete. The area is very remote and roads are almost non-existent.

The meeting on 14 March brought together these community people and organisations to talk about communities that live and thrive on rivers and other natural resources. When such communities are displaced from their resources, they usually lose their subsistence base and with that, their self-reliance. There were presentations on:

But in the most important part of the meeting, the community people were talking to each other and sharing their own experiences. The people that will be displaced by Mphanda Nkuwa heard directly from communities still struggling to

View from the proposed dam site

get their rights after being displaced by Brazilian mining giant, Vale. The ruthless Indian company, Jindal, has also started mining coal in the village of Mualadzi. However, they haven’t removed anyone yet, so people continue to live among the coal dust while the mining continues.

The stories shared by people were heart-breaking. They reveal the cruelty of the extractive model where self-reliant communities are robbed of their natural resources which are increasingly being commodified by the corporate-driven development model.

After the meeting the JA team took the communities back to their villages by the river. We went to visit Sr. Morais, an outspoken elder of the fisherfolk community, who was lived by the river his whole life. The secretary of the bairro (village) prevented him from joining our meeting, even though JA specifically asked for him to participate. If he is forced to move inland, far from the river, his livelihood and, with it, his culture and traditions will 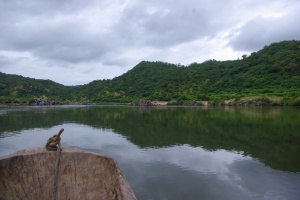 be threatened. We believe this is a crime and a violation of his rights, as well as of all the fishermen whose livelihoods depend on the river.

Along with the meeting in Tete, JA also held an event in Maputo, where we challenged another actor who is actively pushing this damaging extractive model: the World Bank. In Maputo, we invited friends and colleagues to take to the streets. We congregated near the World Bank headquarters in Mozambique, on Kenneth Kaunda Avenue, where we distributed flyers and spoke with passers-by, even Bank workers, students from the neighbouring Faculty of Law of Eduardo Mondlane University and other interested citizens. The Bank was targeted to raise awareness about their role in pushing destructive large dams. The Bank’s stated goal is to reduce poverty but for most of its existence it has actively pushed projects that have

increased poverty especially of the most vulnerable communities.

Action on World Bank in Maputo