Leave a comment
By JA Climatic Change and Resilience, Energy and Society

THE LEADERS’ SUMMIT HAS JUST HOT AIR, WHILE THE PEOPLE HAVE THE CLIMATE SOLUTIONS

World leaders and their unreliable promises grabbed all the headlines at the United Nations Climate Summit in New York last week, but if you want to know about the real solutions to the climate crisis you should tune in to what just happened on the streets instead.

Hundreds of thousands of citizens and environmental activists just marched, in cities across the world, from New York to Kathmandu to London to Delhi to Amsterdam, as part of the People’s Climate March, the largest climate action in history. Thousands also marched at the Flood Wall Street marches, to hold accountable corporations’ role in the climate crisis. 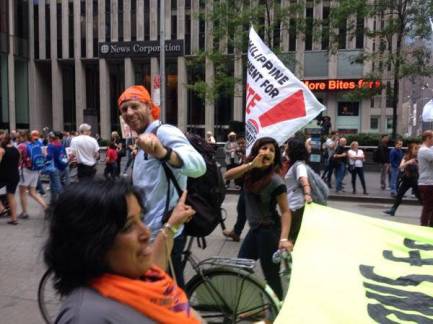 Our message to the so-called ‘world leaders’ is this: This Climate Summit and your empty promises will not bring us closer to solving climate change; you have to make real commitments, take the right actions, or get out of the way. Don’t just talk, walk.

We don’t want these weak voluntary pledges. What we need instead are more legally-binding, ambitious, equitable, science-based emissions cuts. We also need finance and technology for developing countries to deal with the crisis. At the Summit, we heard only the vaguest promises of funding without any real specifics or timelines.

The Climate Summit York laid out the red carpet for businesses. Developed countries’ leaders have been neglecting their responsibility to prevent climate catastrophe because their priorities are being driven increasingly by the narrow economic and financial interests of corporations, dirty energy companies and wealthy elites.

Not all actions on climate change are the right actions. Unfortunately we have a long list of wrong actions or ‘false solutions’ to climate change that are constantly paraded, including mega-dams, natural gas, so-called “clean coal”, carbon capture and storage,  genetically modified organisms, agrofuels, carbon trading, ‘climate smart agriculture’, nuclear, offsetting and mechanisms like REDD (Reducing Emissions from Deforestation & Forest Degradation). These false fixes distract from the real societal and economic changes that exist and are the real solutions needed to stop the climate crisis.

First and foremost we need reduction of greenhouse gas emissions at source. We also need to transform the way we produce, distribute and consume energy. Dirty energy is causing climate change and also harming workers and local communities. We demand clean sustainable community energy – the right for people to have access to energy; to decide and own their sustainable energy sources and sustainable consumption patterns.

So what did the Mozambican Ministry representative have to say in New York? “Energy, where our goal is to improve access to renewable energy, increase energy efficiency, and promote low-carbon urbanization.”

But what are the actions that Mozambique is taking? Are they walking the talk? Actually they are doing the opposite. Instead of supporting small-scale renewable energy solutions for the 80% of Mozambique’s people without energy access, the government is pushing mega-projects, large-scale coal, oil and gas developments, mega-dams and large-scale land-grabbing. But we will hold them accountable to their words and push for people-centred clean development inside of this current polluter-centred, dirty economy.