Plantations are not FORESTS! And in Africa we know what forests are!!!! 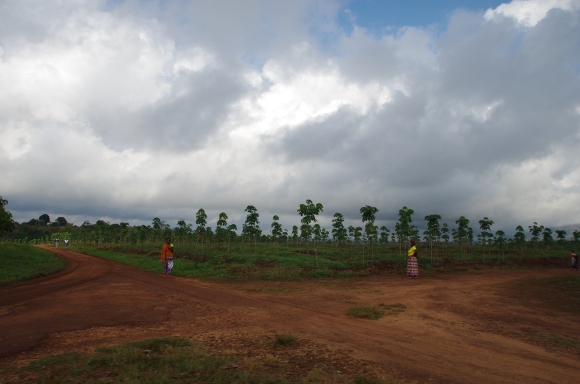 Justiça Ambiental has been following, for about 9 years, with much concern and indignation, the promotion and establishment of eucalyptus monoculture plantations in the country. It has paid particular attention to the plantations of Portucel, Navigator Company and Green Resources, the size of the area granted, and the negative social impacts that both have caused, which are already evident and documented.

In recent years, JA! has maintained contact with the rural communities affected by both companies and has unsuccessfully denounced the irregularities and numerous conflicts that exist with the companies concerned and government authorities, through letters, petitions and requests for meetings. JA! has also requested access to the processes of acquiring Land Use titles (Direito de Uso e Aproveitamento de Terra: DUAT) and Environmental Performance Reports, which constitute information of public interest and nature, but these companies have never offered to share or publish these. Finally, JA! very recently obtained access to the numerous processes for the acquisition of Portucel’s DUAT by means of a court action through Judgment 09 / TACM / 2019. We remain without access to Portucel’s Environmental Performance Reports because it “refuses” to share these. In May of this year, Justiça Ambiental, the Academic Action for Rural Development (ADECRU) and the World Rainforest Movement organized the “Sharing of experiences and resistance among communities affected by Monoculture Plantations” in Quelimane with community representatives from Nampula, Zambezia, Manica and Sofala provinces affected by monoculture plantations and rural communities struggling to protect their forests and natural resources. This meeting was preceded by visits to the communities affected by Portucel, where those present, members and leaders of these communities, reiterated their dissatisfaction with Portucel’s actions, with the numerous promises made during the community consultations as a way deceive the communities into giving up their land, promises that remain unfulfilled until today. Portucel was invited to the meeting so that we could, together with representatives of the affected communities and representatives of the provincial government, share the numerous complaints and discuss possible solutions. However, Portucel apologized and did not send a representative to attend but made sure to send someone to report on what was discussed, so they have full knowledge of what was discussed and how dissatisfied these communities are. The provincial government was represented and heard all the complaints, but also evaded the matter.

It is quite despicable to note through a news article published in “Clubofmozambique” that World Wildlife Fund (WWF), a huge international non-governmental organization that works on environmental issues, recently organized a debate on “Planting sustainable forests in Africa” that no more than gives companies such as Portucel a green seal once again, despite numerous studies and reports demonstrating the numerous problems this type of plantation brings, and in this case the numerous impacts of Portucel in Mozambique. It is unacceptable that it gives a ‘green seal’ to plantations, with a masked and misleading speech that intends to spread the belief that they are planting forests, leading those most inattentive to even believe that they are supporting concrete action to mitigate the effects of climate change. It is indeed misleading and problematic to completely disregard the systematic appeals of the communities affected by Portucel, as it is unacceptable to use its brand and the image of the harmless Panda to lead people to believe that large-scale monoculture plantations are somehow beneficial for mitigating the impacts of climate change. It is also equally unacceptable for WWF to position itself in this way, giving the green seal to companies with so many complaints against them and that are causing so many impacts, knowing that so many NATIONAL organizations have been working on this issue for many years and that it is quite problematic, and that NATIONAL organizations do not have a unanimous position on monoculture plantations… this corporate act is shameful!!!