Over the past few weeks, JA! took part in a lobby tour organised in Europe, by Friends of the Earth Europe, where we met with current partners, made new allies, shared our anti-gas struggle and confronted the companies and banks who make up the liquid natural gas industry in northern Mozambique. This tour was imperative for the campaign, because so many of the companies and banks involved in the industry are based in Europe.

The tour, which went through Rome, Madrid, Amsterdam, Paris and Brussels, was aimed at creating awareness about our struggle against the gas industry in Mozambique and demonstrating the critical need for a Binding Treaty on Human Rights and Transnational Corporations (TNCs) at the United Nations. Currently, there is no accountability mechanism at the UN, only guiding principles which companies do not abide by, as they see them as an impediment to their greed and profit.

Our partners had arranged for JA!, along with activists from the DRC and the Phillipines to meet with current and new partners and allies, as well as industry players and state authorities.

Our confrontations with the industry were often met with blatant hostility, when we tried to hold them accountable for their actions, and when we raised questions they didn’t like. We attended four annual general meetings (AGM’s), those of Shell, Natixis, Eni and Total.

Natixis, the French bank which arranged for the entrance of three major French banks to finance the Coral LNG Project1, was so hostile at their AGM that when JA! attempted to ask a question about their negligence and ineptness in the project, they turned off the microphone and refused to answer the question. Shareholders were shouting “go home!” as JA! and partner organisations walked out of the meeting.

At the Shell AGM in Amsterdam, we were part of a large contingent of civil society organisations, mostly Dutch but also some European. Shell has a sale and purchase agreement (SPA) with Mozambique LNG to buy 2 million tonnes of gas per year for 13 years.

JA! and an organisation from Nigeria were the only attendees from the global South. The response to our questions was, as expected, vague, but our voice had been heard and carried in the Dutch media. Shell had little respect for activists – when the Nigerian activist raised the impacts that Anadarko’s project was having on their community in the Niger Delta, the Charles Holliday, Shell’s Chairman, responded that he should approach the ‘helpdesk’ in the foyer for assistance.

The third AGM we attended was that of Total in Paris, which is the new owner of the Mozambique LNG Project2, since May when it purchased Anadarko’s Africa assets. Anadarko, however, is still operating the project, and plan to hand over the lead to Total at the end of the year. After Greenpeace disrupted the AGM last year, there was a large police presence, and for some reason that was not properly explained to us, even though dozens of activists had arranged for access to the AGM, only JA! and an activist from Greenpeace were allowed into the plenary. JA!’s question was met with a dismissive answer, with Total evading responsibility for the impacts of the gas industry on the ground, claiming that responsibility lies with Anadarko.

This was a theme that came up in all AGM’s that we attended, including the fourth one, that of Italian company Eni, in Rome. Eni, along with ExxonMobil has the biggest stake in operating the Coral South LNG Project in Mozambique. We found that all the companies that we confronted, including during the one-on-one meetings we had with industry financiers BNP Paribas and BPI (French Public Investment Bank) put all the blame for the impacts on Anadarko. When we pushed them for answers, it became clear that none of these companies had even looked at the Environmental Impact Assessment that Anadarko had made in 2014, and yet were blaming them for all the climate injustices that were taking place. They are conveniently ignorant.

JA!’s partners had arranged for us to hold meetings with several authoritative bodies, including Michel Forst, UN Rapporteur on HRD; French parliamentarians from the working group on human rights and TNC’s; the deputy director of the Dutch Ministry of Foreign Affairs; a parliamentarian from political party ally in Spain, Unidas Podemos; Belgian parliamentarians, and party representatives at the European Union.

We also met with other organisations, including Oxfam, Amnesty International, Food First Information and Action Network (FIAN), the Centre for Research on Multinational Corporations (SOMO) and Action Aid.

In each country we spoke at events, to full houses of activists, journalists and the general public, some meetings of over 100 people. Our partners organising the tour had built a media campaign around our visit. Here are links to some of the articles about our struggle in European media and blogs:

It was great to see the amount of interest in our campaign, once people were made aware of the issue, and on the flipside, frightening to see how little attention the industry had been given in European media. But we believe that this tour has taken us several steps forward in the following ways:

Now that we have strengthened the foundation of the Campaign in Europe, we must continue to push for answers and accountability. Push for activists in Europe to take their power as European citizens to hold their companies to account, and push them to force their governments, at national and EU level, to take responsibility for those corporations from whom they receive their tax.

1 Area 4 is operated by MRV, a joint venture company comprising ExxonMobil, Eni and CNPC, which holds a 70% interest in the concession for prospection and production in that area. Galp, KOGAS and Empresa Nacional de Hidrocarbonetos de Moçambique each hold 10% interest. ExxonMobil will lead the construction and operation of liquefied natural gas production facilities and related infrastructure on behalf of MRV, and Eni will lead the construction and operation of upstream infrastructure, extracting gas from offshore deposits and piping it to the plant.

El Salvador is a small and beautiful country located in Central America. This region is culturally called Mesoamerica, an area that has borne witness to centuries of life and struggle of indigenous peoples in this area.

The BGM began with a pre-conference on “Climate Change, Social Movements and Territories”, held on the 5th and 6th November at the University of El Salvador. The pre-conference was organised by FoEI, CESTA and MOVIAC, which is the Movement of the Victims and People Affected by Climate Change. Mesoamerica is one of the few places in the world where people already affected by the changing climate are getting organised and empowered to understand how they are impacted by climate change and raising their voices for change.

The meeting started with fiery presentations from Ricardo Navarro of CESTA and Dr Juan Almendares of FoE Honduras, where they talked about the climate crisis and global problems, social movements, and the struggle for territories. It went on to include many wonderful presentations, especially by people of the affected communities. For example, Maritza Hernandez from Bajo Lempa talked about how the community located at the lower Lempa River kept getting affected by floods and droughts, and how they were forced to adopt adaptation strategies for their survival. See the attached photo from the powerful closing of the pre-conference. FoEI’s Climate Justice and Energy (CJE) program recorded testimonials of many MOVIAC persons, and a 10-min video is already available at:

At the end of the pre-conference, we all marched through the streets of San Salvador together, demanding climate justice

and food justice for all. This was followed by a cultural program featuring local Salvadorian and other Mesoamerican musicians.

That night, we travelled in buses about 2 hours to the location where the BGM was to be hosted. CESTA created a beautiful ecological centre, called Ecocentro in a rural area outside San Salvador. It has been created by CESTA especially for research, investigation, and development of ecological living systems. It has been built in harmony with the environment. For example, all

the toilets are composting pit toilets, which separate liquids and solids, and present a very ecological way of dealing with sewage. The housing structures are all built from local, sustainable materials. The farm at the Ecocentro produced all the lovely fruits and vegetables that almost 100 people ate for three meals every day for 5 days. See the photo of some of the fresh organic produce at the Ecocentro farm.

At the start of the BGM, FoEI Chair, Nnimmo Bassey of FoE Nigeria explained how it was so significant to hold our BGM at Ecocentro, because the place signified how we wanted to live ecologically in the world. Watch this video clip to know more about the Ecocentro:

Another significant piece of news from JA in El Salvador was that our Research and Programs Officer, Daniel, has been elected as one of the Africa representatives to the Executive Committee (ExCom) of Friends of the Earth International. He was elected unanimously with 56 out of 56 votes. See the photo of the new ExCom, including the new Chair, Jagoda Munic from Croatia. 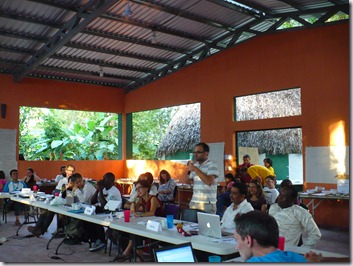